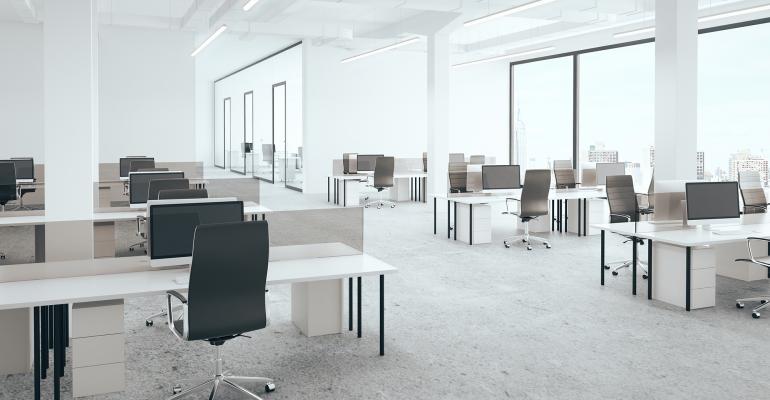 In the last quarter of 2021, 18 of the top 20 office leasing deals in major markets were for new, direct space.

Two years into the COVID-19 pandemic, the exact course for the office sector’s future remains uncertain. But more and more signs are emerging that many office properties will be just fine.

In addition to a ramp-up in office building acquisitions by major investors who often serve as bellwethers for where the industry is heading, office leasing picked up substantially across most major markets in the fourth quarter of 2021, according to Sarah Dreyer, Washington, D.C.-based senior vice president of research and data services with commercial real estate services firm Savills. In fact, leasing volume in major markets in the most recent quarter was up by 89 percent compared to the fourth quarter of 2020, with demand for direct leases coming from a variety of sectors, Dreyer adds.

“A combination of traditional office-leasing tenants—finance, accounting, consulting and law firms—as well as major tech users are displaying a preference for larger, direct deals, either in the form of renewals or relocations,” notes Dallas-based Jeff Eckert, president of U.S. agency leasing with commercial real estate services firm JLL. Big Tech remains by far the most dominant leasing driver nationally, he adds—the sector expanded its office square footage by more than 9 million sq. ft. during the pandemic. According to Savills’ Dreyer, in addition to Meta, major tech tenants that committed to significant amounts of space in 2021 included Amazon, Microsoft, Hulu, Hubspot, Apple, Riot Games, and Activision/Blizzard. Meanwhile, the federal government also leased a significant amount of space last year, particularly in the Washington, D.C. area, she adds.

In the fourth quarter, the total office leasing volume was highest in Manhattan, where tenants signed 9.3 million sq. ft. in office deals, according to Savills data. Meanwhile, San Francisco experienced the largest increase in year-over-year leasing activity, up 400 percent, to 1.8 million sq. ft. “This was a positive sign, as San Francisco was arguable the market hardest hit by effects of the pandemic,” says Dreyer.

Other major U.S. cities, including Boston, Dallas, and Los Angeles, all saw strong office space absorption in the fourth quarter of 2021, according to Colliers’ Morgan. However, the markets that are seeing the greatest bounce back in office demand, as measured by net absorption, are second-tier, tech-friendly cities, such as Austin, Nashville, Tenn., and Salt Lake City.

What are tenants looking for?

Office tenants’ desire for high-quality spaces with top-notch amenities was already a trend pre-COVID-19, but it has evolved further as firms seek to attract the best talent and draw workers back to the office, according to Morgan.

Tenants signing new leases today are displaying a strong preference for newly delivered and under-construction products, according to JLL’s Eckert. JLL data shows that 24.7 percent of new leasing activity in recent quarters has taken place in buildings delivered after 2015, despite the fact that they represent just 12.8 percent of total U.S. office inventory.

However, when it comes to prospective tenants’ expansion or contraction plans, the picture is less clear, according to Dreyer. “There’s no one-size-fits-all, with some companies increasing space to allow for more distancing between employees and common areas/collaboration space, and some taking less space as hybrid-work models are implemented long-term,” she notes.

The potential size of many office tenants’ total footprints will remain unclear until there is a larger scale return to the office, agrees Morgan. “Given existing lease commitments and the time it will take to achieve optimum workplace solutions, it will take several years for all of this to fully play out,” he says.

There are more new office leases being signed—18 of the 20 largest transactions in the fourth quarter involved new commitments rather than renewals, according to Morgan. And “In terms of relocations, there hasn’t been the much-vaunted move to the suburbs from downtown locations than some commentators predicted,” he notes. But new lease commitments are trending shorter than pre-pandemic.

New office lease terms fell dramatically over the course of 2020 according to Eckert, from a typical range of 8.5 to 9.5 years to 6.7 years. But a growing share of new leases in the 10-plus range signed in 2021 helped to bring the average up to 7.8 years. “As tenants seek greater flexibility moving forward, lease terms are likely to remain slightly shorter than before the pandemic as part of a structure shift in market dynamics,” he says.

But the recent increase in longer-term leases may be a reflection of firms taking advantage of favorable terms currently being offered by landlords. Asking rents are largely holding firm in most markets, according to Colliers International data, with rents for class-A office space averaging $52.40 per sq. ft. in Central Business Districts (CBDs) and $34.20 per sq. ft. in the suburbs. But the gap between asking and effective rents is widening, notes Morgan. Tenant concessions also continue to increase, he says, with landlords offering both rent abatements and higher tenant improvement (TI) allowances. There’s evidence of His breaking through the $100 per sq. ft. mark in top markets, Morgan adds. According to Dreyer, landlords are also allowing increased flexibility in lease terms, including expansion/contraction and termination options.

Due to the generous concessions, net effective rents for class-A office space in CBDs are now 7.1 percent below pre-pandemic levels, according to Eckert (though that represents an improvement over the 18.9 percent decline recorded in 2020).