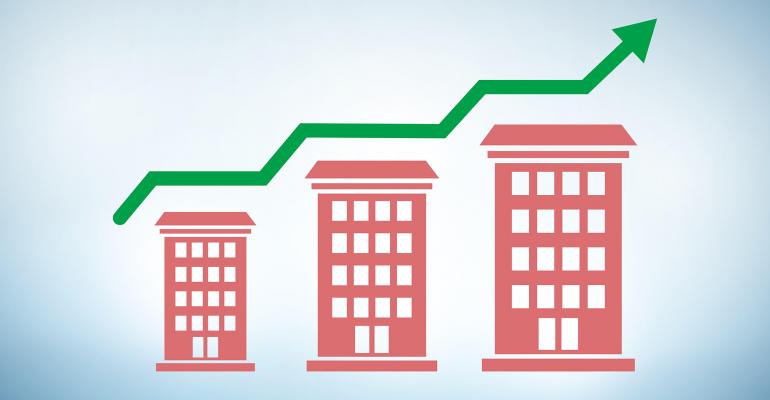 Some buyers are trying to renegotiate prices, but a net result of recent moves could be a tightening in the spread between multifamily cap rates and yields on 10-year Treasuries.

With the recent rate hikes from the Federal Reserve, borrowing costs for multifamily assets are rising as well. This is disrupting sales volume as higher rates are leading some potential buyers of apartment properties factor higher debt costs into previous assumptions they made when they first planned to buy an apartment property. Potential buyers are likely to want to cut the amount they are willing to pay, relative to the income from the property—but it is still too early to tell how much and whether sellers will go want to renegotiated.

“We hear from our brokers that some amount on re-trading is going on,” says Dave Borsos, vice president of capital markets for the National Multifamily Housing Council, based in Washington D.C.

Buyers of apartment properties are demanding higher yields on their investments, according to dealmakers and economists. They are pushing prices lower as the interest rates for acquisition loans rise.

It’s too soon to see this change in the latest national data. In May 2022, investors accepted an average cap rate of 4.8 percent for apartment properties, according to MSCI, based in New York City. That down 20 basis points from the year before. It’s the lowest average cap rate—and the highest prices relative to income from the properties—ever recorded for apartments. The record low largely represents sales of apartment properties that had been negotiated months before, long before interest rates began their recent rise.

Anecdotally, investors are demanding higher cap rates, but not nearly as high as the more than 200 basis-point climb in long-term interest rates. The net result could be a tightening in the risk premium—the spread between cap rates and yields on 10-year Treasuries.

“The average cap rate has not gone up as dramatically as the lending rates,” says Borsos. “There are offsetting market forces that are keeping cap rates lower.”

Investors in apartment properties are having to pay higher interest rates when they take out fixed-rate, permanent loans.

“The overall cost of debt is up more than 150 basis points from six months ago; starting interest rate north of 4.5 percent for both fixed and floating due to a dramatic increase in underlying indices,” says Kelli Carhart, head of multifamily debt production for CBRE.

Interest rates for most fixed-rate, permanent loans to apartment properties are based the yields on U.S. Treasury bonds. Ten-year Treasury bonds yielded 2.99 percent on July 11, 2022. That’s up more than two full percentage points from less the 1 percent for most of the first year of the coronavirus pandemic. Yields stayed close to 1.5 percent for most of 2021. The benchmark yields rocketed higher in 2022, as Federal Reserve officials signaled they would raise their overnight interest rates to fight inflation and cool down the overheated U.S. economy.

“Everyone expects the Federal Reserve to raise their rates another 75 basis points, because inflation (in June) was at 9.1 percent,” says Borsos.

However, lenders are also making smaller loans. “The decrease in leverage is significant from 75 percent to sub 65 percent and often much less,” says CBRE’s Carhart.

Buyers of apartment properties also have to worry that price inflation will affect the cost of labor and utilities at properties they purchase – and that will also eat into the yield of their investments. “People are taking that inflation into account and are re-running their numbers,” says Borsos.

Borrowers still have a lot of choices when they look for financing, however. That’s in part because demand for apartments is still strong and apartment rents have continued to grow in 2022—even after a very strong year in 2021.

“Liquidity in the debt space is not an issue today, rather pricing and interest rates have changed,” says JLL’s Aelyon.