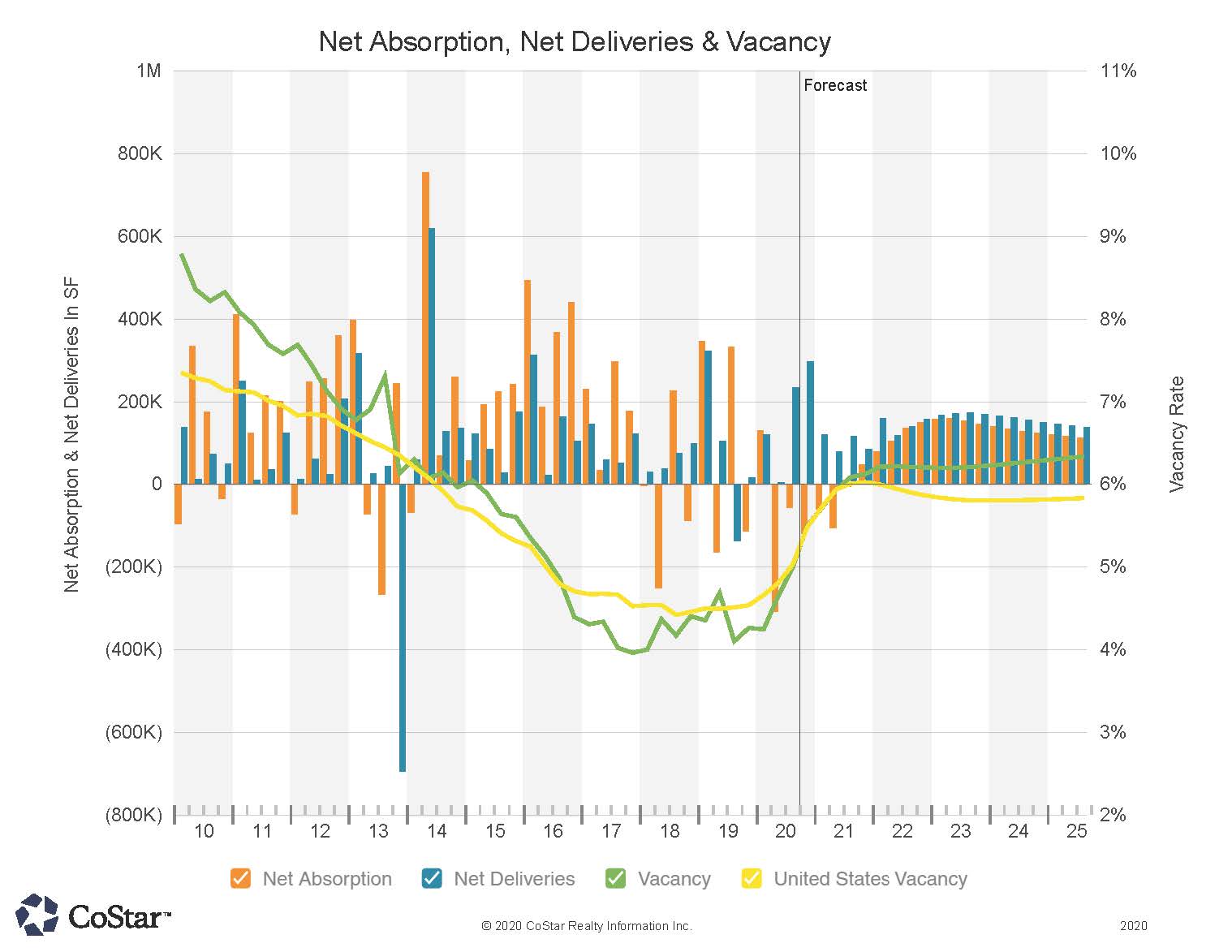 Vacancies were stable and close to 4.5.% before the onset of the coronavirus pandemic. A reasonably low level of deliveries over the past decade, coupled with strong demand, sent the vacancy rate on a downward trajectory for the better part of the past 10 years.

The metro’s major retail drivers include favorable demographics, median household incomes that are close to the U.S average, and many retirees, many of which spend part of the year in the area. While Palm Beach is less reliant on tourist activity, when compared to neighboring Miami and Fort Lauderdale, the onset of the coronavirus pandemic in March had a profound and immediate negative impact on the metro’s retail sector. All retail outlets, except grocery stores and other pharmacies, were ordered to close overnight, leading to significant loss of business activity.

Construction has been very measured over the decade before the onset of the coronavirus pandemic, and the prelease rate for properties in the works is close to 95%. Sales activity over the past few quarters was healthy, prolonging a multi-year stretch of good investment conditions. The outlook for the market remains uncertain, as social distancing measures have not only caused an immediate loss of business but will weigh heavily on demand for the rest of the year.

The onset of the coronavirus pandemic found vacancies close to the lowest point over the past decade and below the national average—vacancies over the prior two-year period plateaued at close to 4.5%. Development was measured, and demand consistently surpassed new deliveries, sending vacancies on a declining trajectory for the better part of the past decade.

However, the retail sector’s outlook is uncertain. Almost all the county’s stores remain closed, depriving businesses of revenue, while they continue to pay fixed costs, including rents. Many of the area’s retail businesses are small and medium-sized and are more vulnerable, given the weakening demand over the medium term.

The pandemic’s economic fallout over the next few quarters will also translate to spending uncertainty, putting further negative pressure on demand. When economic activity returns to some sort of normalcy, capital goods sales, such as cars, could recover some of the lost ground. But consumable goods, excluding those sold in grocery stores, and experiential retail and restaurants, have likely lost almost all revenues since social distancing measures were enacted.

Unlike Miami and Fort Lauderdale, most of Palm Beach visitors are affluent seasonal residents from the north of the county, rather than tourists. Many of the area’s seasonal residents were in Palm Beach when the pandemic arrived, and this will help mitigate the demand fallout once the market gradually reopens. However, some forms of social distancing measures, such as spacing store and restaurant patrons, are likely to persist, and this will continue to weigh on the health of the retail sector.

With a meaningful part of this year’s demand uncertain, the Severe Downside scenario, which is typically reserved for stress testing but is entirely appropriate under the circumstances, may offer the most likely outcome: vacancies rising significantly over the next year.

Rental rates are currently at $28.00/SF, close to a third above the national average. Because of the county’s size, properties are dispersed, and rents vary greatly. The Palm Beach Submarket, which encompasses most of the coastal retail property in the county, has the highest retail asking rents at more than double the metro average.

Palm Beach retail rent growth decelerated for the best part of the year before the onset of the coronavirus pandemic. On a national level, rent growth was the most notable casualty of the national retail sector transformation. The Palm Beach metro saw vacancies compressing, but rent growth consistently declined across the country over the past couple of years. The demand outlook remains uncertain, as the full impact from the coronavirus pandemic is unknown at this point. A weakening economic outlook will translate to significantly lower rent growth over the next few quarters.

The current uncertain environment in Palm Beach suggests that transaction activity is likely to slow, as uncertainty weighs more heavily on investors and lenders. Investors will need to reassess their projections for future cash flows and property performance, as the coronavirus-spawned recession renders their projections increasingly uncertain. Lenders are also more reluctant to lend as the recession progresses, instead taking a pause to evaluate rent growth assumptions and deal profiles. Meaningful declines in the deal volume are expected as a result.

Before the onset of the coronavirus pandemic, annual transaction volume in the Palm Beach retail market was strong and compared favorably to the prior year’s activity. Buyers favored shopping centers in suburban parts of the metro. The North Palm Beach, Royal Palm Beach/Wellington, and West Palm Beach submarkets accounted for more than half of the past year’s activity.

Private investors drove close to three-quarters of the past year’s activity, while private equity investors account for just under 15% of the deal volume. Users, REITs, and institutional investors account for close to 5% each. There is little foreign investment in the Palm Beach retail market, as close to 65% of investors are local, with the remaining almost entirely domestic.

Prices rose by close to 50% over the five-year period prior to the onset of the coronavirus pandemic. As with the rest of the country, the coronavirus pandemic has disrupted financing and added uncertainty when pricing transactions that are currently in the pipeline. Lending spreads have recently widened significantly, something that could cause many deals that are now in the works to get canceled or renegotiated. As cash flows become less certain, valuations will become inherently riskier, and together with more expensive financing, will likely lead to a significant reduction in investment activity over the next few quarters as investors sit on the sidelines while the dust settles.

While jobs gradually return, Palm Beach County’s economy continues to be affected by the coronavirus pandemic. One of the three South Florida counties which have contended with a high virus caseload, Palm Beach remained down about 69,000 jobs as of the Bureau of Labor Statistics’ (BLS) release of August jobs figures. In the four months from May through August, the county recovered only about a third of the jobs lost in March and April.

In those two months, when the county was locked down to prevent the spread of the virus, Palm Beach lost more than 100,000 jobs. Florida started to gradually re-open establishments in mid-May, which led to a recovery of about 24,000 jobs across the county that month. The recovery slowed in the months after May. About 7,000 jobs came back in June, but by July, as the city continued to contend with the spread of the virus, distancing mandates and limits on indoor gatherings were again implemented and more than 3,000 jobs were again lost.

The virus continues to impact tourism, a vital industry in Palm Beach County. Jobs in leisure and hospitality, which comprised more than 15% of the county’s workforce pre-pandemic, remained down 33,000 jobs as of August. This represents a recovery of about 31% of the 48,000 jobs the sector lost in March and April.

Retail trade jobs have also been hit hard while shops have closed, and many people choose to stay home even after mandates have been lifted. About 79,000 people worked in retail trade in Palm Beach prior to the pandemic. As of the BLS’ August report, more than 4,000 such jobs had been recovered since the state re-opened in mid-May, but the sector was still down more than 5,000 jobs from February.

The greater trade employment sector, excluding retail trade, has struggled as well. In addition to the nearly 10,000 retail trade jobs lost in March and April, the market lost an additional 2,000 non-retail trade, transportation, and utilities jobs. By August, the sector was down 3,000 jobs from February, having lost jobs in each subsequent month except June.

Since South Florida implemented some of the longest lockdowns due to the heightened spread of the virus, the economic recovery here is likely to be slow. Palm Beach County does benefit, however, from a diverse workforce where no one industry accounts for more than 20% of jobs. This should help to insulate the market from higher losses as a proportion of the workforce during downturns.