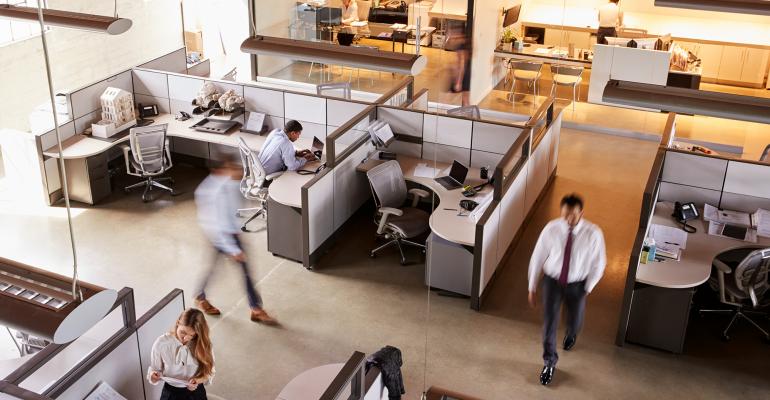 Far fewer tenants are putting space on the market compared to last year, and some are taking their spaces back.

As the COVID-19 pandemic in the U.S. reaches its 18-month mark, we are now in a new stage that is changing the equation for both office occupiers and landlords. The highly transmissible Delta variant of the virus is driving up cases and hospitalizations in some regions of the country, largely among the unvaccinated, leading corporate occupiers to struggle with when to bring most of their workers back to the office. At the same time, effective vaccines against COVID-19 are now widely available in the U.S. and last week President Biden announced that the federal government, through OSHA, will require businesses with more than 100 employees to issue vaccine mandates or regular testing for employees who decline to get vaccinated. The new regulations should theoretically make it much easier for large employers to require their workers to come back to in-person work (New York Mayor Bill De Blasio has already done so for the city’s municipal workers starting this week, after mandating vaccination earlier this summer).

As a result, while the amount of sublet office space in the market remains high, the trend of companies putting their offices up for sublease is slowing down with workers gradually returning back to on-site work.

According to a mid-year report from real estate services firm Cushman & Wakefield, the volume of sublet office space in the U.S. doubled over the last year, rising from 67.3 million sq. ft. at the end of the first quarter of 2020 to 132.4 million by the end of the second quarter of 2021. However, the share of sublet space to the market’s total office inventory stood at just 2.4 percent—below the 2.9 percent figure reached during the dot.com bust of the early 2000s.

On a national level, suburban properties account for the greatest share of the overall sublet space, at 57 percent, vs. 43 percent in central business districts (CBDs), Cushman & Wakefield researchers found. In Manhattan, the nation’s largest office market, sublet space, at 22.4 million sq. ft., currently makes up 5.5 percent of total inventory. In San Francisco, the share of sublet space as a percent of total inventory is higher, at 9.1 percent, or 11.0 million sq. ft.

Overall, gateway cities are now seeing slower growth in sublet space coming on-line than U.S. markets as a whole, according to a report from real estate services firm JLL—a reversal in trend lines.

Tenants’ reasons for subletting parts of their office portfolios vary, says Jeff Eckert, president of U.S. office agency leasing at JLL. Commonly, it is in reaction to the company’s financial constraints. In other cases, it is resulting from a proactive approach to workplace strategy. Salesforce, for example, has announced it is subleasing a portion of its office space as a result of the management’s decision to implement more remote work. Or, the decision can be due to entity-level changes, such as a mergers and acquisitions.

A recent survey by Digital.com that included 1,250 businesses of various sizes found that more than 58 percent downsized their office space during the pandemic. Among the reasons cited for the decision, slightly less than one-third said most employees wanted to work remotely, while 23.62 percent indicated the move was to save money. About one-fifth said they got rid of some office space as they tried to deal with employee safety during a pandemic and an additional 22.93 percent pointed to employees being equally productive or more productive working from home (which would ostensibly also save these companies money in real estate costs and utilities).

The good news is that growth in new sublet space peaked in the third quarter of last year, when 22.3 million sq. ft. was placed on the market, notes Eckert. It has been declining ever since, with the rate of expansion in sublet inventory slowing for three consecutive quarters. In the second quarter of 2021, the growth in sublet space reached just 4.5 percent, nearly 80 percent below the peak hit in mid-2020.

The Digital.com survey found that the majority of its respondents (61.23 percent) had no plans to further downsize their office space.

In addition, the pace of new listings is decreasing, while sublease space withdrawn from the market continues to increase, he adds. Since the end of March, more than six million sq. ft. of sublease space has been taken off the market, 81.7 percent of which is being re-occupied by the original tenant as part of de-densification efforts and/or renewed confidence in an office-centric work culture.

Real estate services firm CBRE reports that on a national basis, class-A office sublet space currently provides a 13 to 14 percent discount to similar space offered directly by the landlord. For the top 25 secondary markets, the discount is at 20.1 percent, vs. 16.8 percent pre-pandemic. In gateway markets, including Manhattan, Boston, Chicago, San Francisco, Los Angeles and Washington, D.C., the discount averages 11 percent. Pre-pandemic, class-A sublet space in those cities commended a premium of more than 3.0 percent, which is not unusual when vacancies are low and space is in high demand.

Eckert says that while the availability of high-quality sublease space can potentially suppress overall market rents and divert tenants from traditional, directly available spaces, in many cases, available sublease spaces do not compete directly with spaces marketed by landlords. That’s due to different build-out styles and lease terms, as well as the size and location of these spaces, among other factors.

“It’s difficult to characterize the impact of anything on market-rate rents today. In most markets, headline rents have not moved all that much,” notes Matt Vance, research director and senior economist with CBRE. “While tenants put off making long-term leasing decisions, landlords have little incentive to slash prices and compete for occupiers.”

Conditions have been slightly different in two of the nation’s largest office markets, Manhattan and San Francisco, where the availability of sublet space is having an effect on rental rates and where asking rents have declined considerably. “Vacancy and availability have increased higher than equilibrium, and pricing power has firmly shifted to the tenant market,” says Vance.