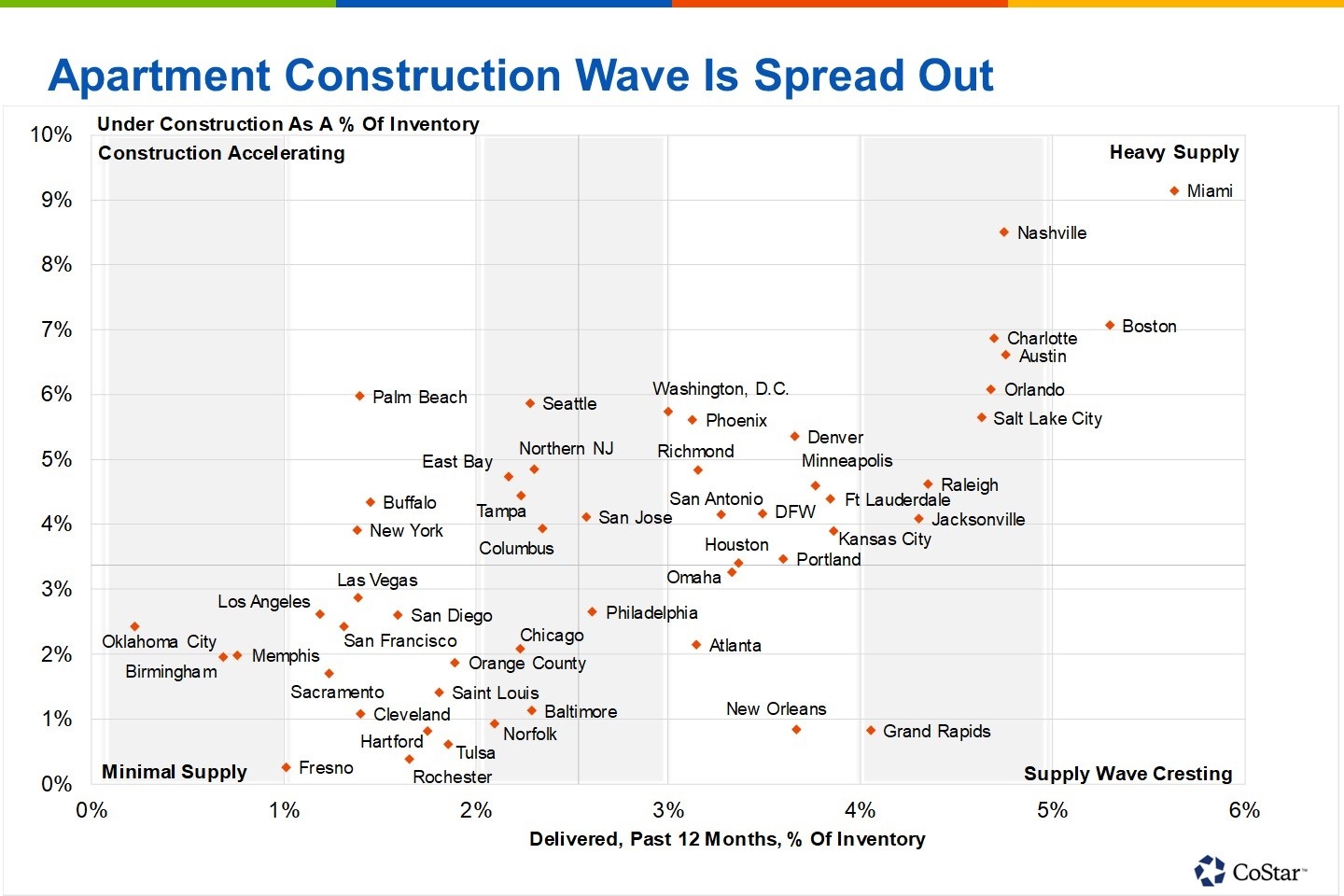 By David Kahn and Sam Tenenbaum

Multifamily performance in the United States varies widely by region as the country copes with the effects of the pandemic.

Market response to the public health crisis ran the gamut over the past two quarters in terms of demand and rent growth. Investment activity is up in some regions, while it remains tepid in many traditionally investor-friendly gateway markets.

While the coronavirus has undoubtedly had a major impact on multifamily performance, particularly on the demand side, supply still accounts for much of the difference in rent growth region to region.

Looking at data on recently completed and under construction multifamily units by market can provide a sense of the areas that are contending with serious supply waves. The data can also sense out markets that are about to get past a major surge in supply, and those where supply is still not much of an issue.

For this analysis, CoStar plotted cities by multifamily completions over the past 12 months and the number of units under construction, both as a percent of inventory.

Nationally, roughly 2.5% of multifamily inventory delivered in the 12 months ending in the third quarter, and about 3.4% of national stock is under construction.

Cities in the upper right-hand quadrant are those with more recently completed and under-construction stock as a percent of inventory relative to the national benchmark. Those cities are contending with lots of new supply, and a wave that has not quite crested yet. That means there is plenty of new construction still on the way.

Unsurprisingly, many of these areas, such as Miami; Nashville, Tennessee; Boston; Orlando, Florida; and Austin, Texas, have seen rents fall on a year-over-year basis. While there are still demand-side issues with each of these cities, primarily stemming from the impact of the pandemic, the recently delivered and soon-to-deliver construction is making it difficult for apartment owners to maintain rent levels without sacrificing occupancy.

When the majority of these projects started, the pandemic wasn’t on anyone’s radar. Most of these cities had some of the best economic growth in the nation prior to the public health crisis and subsequent recession. But with plenty of supply on the way and continued economic uncertainty, tenants are gaining pricing power rather than landlords.

Shifting to the bottom right part of the graph, markets in this quadrant represent areas where the supply wave has crested. The major stand-out city is Atlanta, where about 3.1% of the market’s inventory delivered over the past 12 months, but only 2.2% of stock is underway.

Atlanta has already seen a strong rebound in rent growth over the past few months, fueled by record demand and a resilient economy. Considering how the city’s construction pipeline has cooled lately, Atlanta apartment owners may find themselves in an advantageous position over the next few quarters, as long as the city’s economic recovery continues apace.

The bottom left quadrant includes locales with limited construction risk relative to the overall nation. The quadrant includes slower growth, but steady Midwestern markets, as well as West Coast areas where zoning regulations make it difficult to build new apartment complexes. Las Vegas stands out here, as the market is ordinarily a developer favorite. But a constrained supply pipeline has helped insulate tourism-heavy Sin City from the pandemic thus far, and its annual rent growth of better than 4% is one of the strongest marks in the country.

Finally, the top left quadrant is home to cities where the supply wave is just forming, and landlords could face increased competition in the coming years. Depending on the depth and length of the recession, some of the projects underway could deliver into an improving, or a still-languishing, economic environment.

New York stands out for this reason. The average construction timelines in the Big Apple are significantly longer than any other city because most construction consists of high-rises within tight parcels.

Groundbreakings have slowed nationwide amid the pandemic, but there are still about 580,000 units under construction. Although multifamily absorption recovered in the third quarter, the near-term demand outlook is still uncertain due to questions about the economic recovery, rent collections, additional stimulus, and a rising homeownership rate, among other factors.

In such an uncertain demand-side environment, looking at recently delivered and upcoming supply pipelines can help give a clearer view of how different cities will likely perform over the next few quarters as the nation continues to adapt to the coronavirus crisis.