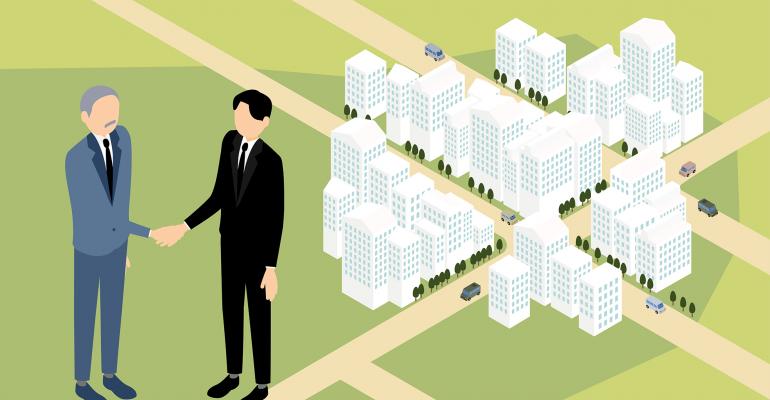 The disruption caused by the pandemic made off-market transactions more attractive for both investors and potential sellers.

Earlier this month, global investment firm KKR announced that it had partnered with Kairoi Residential to acquire Novē at Knox, a class-A luxury multifamily complex located near downtown Dallas. The joint venture acquired the 19-story, 310-unit property in an off-market deal after KKR approached the owners, KBS and Southern Land Company.

Novē at Knox is just one of the many multifamily properties that have traded hands this year without going through a public marketing process. The acquisition represents the growing trend of off-market deals, not just in multifamily, but in every sector of commercial real estate.

Both owners and buyers are increasingly keen to do off-market deals, albeit for different reasons. And regardless of the motivations, these deals occur because they’re mutually beneficial—both parties feel that they’ve made a good deal and are happy with the outcome.

“In today’s competitive market, it is becoming harder and harder to compete and transact on deals that are brought to the mass market,” says David Beare, partner with ARK Residential, a New York-based firm that invests in multifamily and mixed-use assets. “Finding an off-market transaction provides an opportunity to work together with a seller and try to solve for each other’s goals.”

Motivations for owners to sell off-market

While there’s no data that tracks whether deals sell off-market, industry experts estimate that at least half the deals that trade are never brought to market. Some experts posit that as much as 80 percent of closed deals are “one and done”—meaning only one buyer had a shot at the property.

In the past, finding off-market deals was often time consuming and difficult, and potential buyers struggled not only with identifying off-market opportunities, but uncovering those that fit their specific investment criteria. However, the availability of data and the increased use of data analytics has made it easier to identify, underwrite and close off-market transactions.

While the broad marketing of a property has many benefits, off-market sales have their advantages as well, according to Loryn Arkow, a partner in law firm Stroock’s real estate practice. For example, if the seller seeks confidentiality surrounding the sale or values an expedited and more efficient process, an off-market deal might meet their needs.

An owner must feel confident that the off-market offer is fair and comfortable that the buyer won’t re-trade for an off-market deal to work, says Miles Pratt, managing director of real estate acquisitions for Archer. The data-driven investment firm works with real estate investors to help identify off-market transactions.

“Every owner has an idea of what their property is worth—a number that would convince them to sell,” Pratt says. “If a buyer comes along and offers that number, and that buyer also offers certainty of close, why wouldn’t an owner be willing to do a deal?”

Archer’s tech platform categorizes owners and properties by how likely they are to trade off-market and assigns a “seller propensity score.”  The score is based on a property’s ownership structure, average investment horizon for the ownership entity, financials and other data points.

ARK Residential is working with Archer to identify properties in specific locations with specific characteristics that have enough upside to pursue. “We try to engage directly with owners to see if there is a way to unlock an opportunity,” Beare says.

The pandemic has also driven increased interest in off-market transactions, especially for owners with properties that took a bit of a hit on vacancy or market rents. Colin Behring, CEO of San Ramon, Calif.-based Behring Companies, contends that on-market sellers are pressured to price their properties lower than recent valuations to account for depressed market rents and artificially inflated construction costs.

“Nobody wants to publicly set pricing lower,” Behring says. “Off-market transactions are particularly advantageous if you need to deploy capital quickly or want to liquidate your assets without creating fanfare.”

With so much capital chasing multifamily properties—maybe more than ever before—investors are desperate to find a place to park their money. It’s not usual for marketed properties to receive hundreds of offers, which makes it difficult for buyers to break away from the pack and win the deal.

“Capital is clearly cheap and demand is high, so the need for properties … is more than the current ‘market’ can offer,” says Kevin Mattice, chief product officer for Cherre.

Mattice adds: “The universe of opportunities is much vaster than what is currently on the market. An acquisition hypothesis is based on market trends and conditions, demographics, property values, economics and a multitude of other factors that shouldn’t be limited by what is on or off the market.”

That’s why most active multifamily investors are pursuing both on and off-market deals. “Whenever you’re out there looking for deals to buy, you’re going to look at every angle you have, and of course that includes off-market deals,” says David Vincent, investment product specialist at Cadre, a New York-based investment firm that routinely buys and sells properties off-market.

Cadre recently acquired a class-A multifamily community in the Dallas suburb of Farmers Branch for $92 million in an off-market transaction. According to Vincent, the owner-developer didn’t want to go through the marketing process if he didn’t have to and was eager to sell to Cadre if the firm could meet his required price.

Pricing always has been—and continues to be—a key piece of the off-market puzzle.

Historically, owners shied away from off-market deals, fearing that if they didn’t take their properties to market, they wouldn’t get a fair price or that they’d miss out on some upside. Buyers, meanwhile, pursued owners in hopes of nabbing an asset for below market price.

Yet the vast majority of off-market buyers today don’t expect owners to sell their assets at a discount, according to Archer’s Pratt. “Most people involved in off-market deals understand that off-market doesn’t mean below-market,” he says. “It means you’re probably going to pay market or maybe slightly above market. But in exchange, you’re not going to have to compete with anyone else, and you’re going to close a deal instead of losing it to another buyer.”

Owners that are amenable to investors that approach them with an offer are banking on the idea that the potential buyer targeted their property because they saw its value and aren’t trying to take advantage of owners.

“When we engage in off-market deals, we are going after properties where we have very strong working knowledge of the property, a firm grasp of the economics surrounding the property and can clearly convey that the offer is fair,” Behring says. “If the offer is fair and the exit fits the ultimate goals of the seller, you will get a deal done.”

Mattice likens off-market commercial real estate deals to selling a home or car: “The opportunity that your property is worth something to a buyer when you didn’t think it was something to sell can be a pleasant surprise.”

Some owners might prefer to dispose of their properties in off-market deals, but their hands are tied by investor mandates. More often than not, investment firms are contractually required to put assets through a full marketing process—the assumption being that an off-market deal wouldn’t allow investors to realize the full value of the assets.

However, there’s risk involved in bringing an asset to market: when the market doesn’t agree with the broker’s opinion of value (BOV) or how much an owner thinks the property is worth. Once a property is on the market and doesn’t trade, it makes it harder for a seller to successfully sell in the near future, notes ARK Residential’s Beare.

One of the downsides to publicly marketing a multifamily property is the time involved. It takes several months to go through an entire marketing process—from interviewing brokers to best-and-final offers–and that doesn’t even include the due diligence process or the closing, Pratt says. He adds: “Off-market deals streamline the acquisition process for both owners and buyers.”

Earlier this year, Archer rolled out an automated underwriting tool that decreases the time and effort required to accurately and efficiently evaluate a property and allows buyers to move more quickly with LOIs. AIM Automated Underwriting can underwrite any multifamily property in less than 15 minutes—a process that usually takes several days to complete.

In today’s market, the ability to move quickly is a competitive edge for investors. In fact, when a property is marketed, many potential buyers will try to make themselves more attractive by offering a quick close.

Owners benefit from off-market transactions simply because “they had to do nothing to generate the demand,” Mattice says. “It takes less time and effort for an owner to market their property if it never had to go on the market in the first place.”

Some owners might be worried about market volatility or that market conditions might degrade during the marketing process, which would create a hiccup. In those situations, off-market deals are a hedge against market risk.

Bidding wars and competition between buyers take time to resolve and the right price for the right off-market property can significantly increase speed. For a lot of owners, timing is almost as important as price—maybe even equally important, according to Cadre’s Vincent.

“Would some of these properties trade for a higher price if they had been fully marketed?” he says. “Absolutely. Now, does that mean that we think we’re taking advantage as a seller? Absolutely not. That is the balance—from the seller’s perspective, they’re getting the speed of transaction. From the buyer’s perspective, they’re getting the property they want at a price that makes sense for them.”