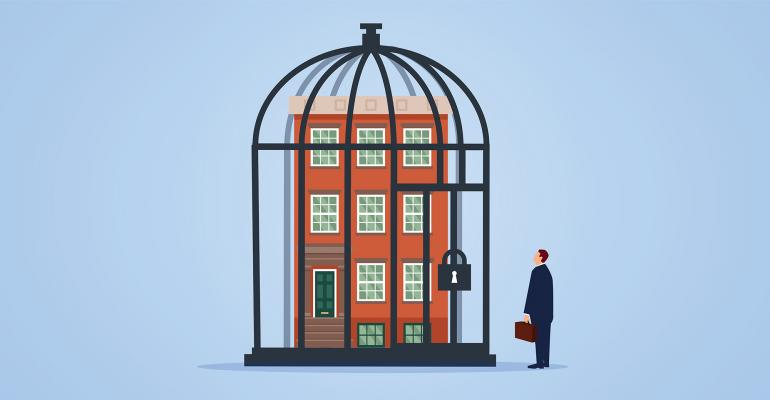 Multifamily investors are increasing hold times for their properties, and not just by a few months either. Investment firms and fund managers are doubling and even tripling hold periods, partly because it’s what their investors want, and partly because it just makes sense, given current market conditions.

Historically, hold periods for multifamily properties have not lasted beyond five years. Investors—small and large, private and institutional—didn’t want to lock up their money for an extended period of time. In fact, the thought of committing to a particular asset for 10 to 15 years was intensely unappealing because it didn’t allow owners the flexibility to change course.

But the need to cut and run is no longer as strong, and that changed sentiment is leading to a shift in hold periods, according to Jahn Brodwin, a senior managing director with management consulting firm FTI Consulting. “I’m hearing a lot of frustration from my clients—how hard it is to find investments that meet their criteria—and the answer is to buy more dynastically,” Brodwin says. “A lot of the wealth in this world has been built by owning the same real estate for several decades.”

Managers that previously held assets for three years are stretching their ownership from five to seven years. And those that previously held multifamily assets for longer than seven years are shifting their investment strategy to 10 years or longer.
“This is evolutionary,” says Brodwin. “Real estate fund managers have this pile of money that they’re trying to deploy, and it just doesn’t make sense, on a short-term basis, to sell the multifamily assets they already own, given what’s happening with cap rates, inflation and housing demand dynamics.”

The Beach Company, based in Charleston, S.C., has been investing in commercial real estate since 1945, typically underwriting shorter hold periods for its multifamily investments. Its new fund, Beach Real Estate Fund (BREF), is structured differently: investing exclusively in multifamily properties across the Southeast, it buys with a planned seven-year hold with three one-year extensions.

The firm’s decision to increase its hold period for the new fund was driven, in part, by investor preference. By and large, BREF investors don’t want to go through the investment decision process over and over. They also prefer recurring yields over capital gains and other taxes, which means they gravitate toward longer-term investments. In fact, some investors favor hold periods in excess of those outlined by the fund, up to 10 years.

“Our investors are primarily investing for the long term, and they want their dollars to be at work producing consistent yields for the long term,” says Leonard Way, senior vice president and fund manager with BREF. “They enjoy making a profit, but then want to get the money back to work.”

But accommodating investor preferences is just one of many reasons fund managers and investment firms are lengthening their hold periods. The positive outlook for the multifamily sector, driven by a shortage of housing and promises of strong renter demand and NOI growth for the foreseeable future, are reasons enough to hang onto multifamily assets.

Lord points out that investment firms and asset managers often look to Freddie Mac’s National Apartment Investment Market Index (AIMI) when evaluating whether to hold or dispose of multifamily assets. The index captures key performance measures of a representative sample of properties across major U.S. markets and compares rental income to the cost of investment, property price growth and mortgage rate.

Through the pandemic, AIMI has shown considerable strength. Heading into the third quarter, the index increased 5.2 percent compared to an average of just 2.0 percent over the past two years. Property prices increased 7.5 percent, while the historical average was 6.6 percent, and permits were down by 3.9 percent, in contrast to a historical average of 11.7 percent.

If the promise of NOI growth isn’t enough to motivate fund managers and other investors to stay the course with their existing holdings, today’s inflationary market will likely push them over the edge.

Historically, multifamily assets have been be good hedges against inflation. As inflation expectations rise, fund managers will likely prefer to extend the hold periods for these assets to mitigate adverse consequences from inflation risk, Lord says.

The annual inflation rate in the U.S. surged to 6.2 percent in October 2021, the highest since November 1990 and above forecasts of 5.8 percent. Economists expect the inflation rate to reach 6.3 percent by the end of the year.

Earlier this month, Federal Reserve Chair Jerome Powell said it’s likely that inflation will moderate “meaningfully” in the second half of 2022 as supply chains issues get resolved, but “the risks of higher inflation have moved up.”

“When you’re in an inflationary period, the question is whether the inflation will be sustained, how long and how much,” Brodwin notes. “Multifamily properties tend to perform better because most leases reset every year, if not sooner, and owners have the ability to take advantage of the inflationary increase while costs remain fixed. They’re essentially making money two ways.”

Beyond macroeconomic trends, asset managers might also feel compelled to extend their hold periods because there’s so little available inventory. There’s a dearth of properties on the market, and competition far exceeds supply, so investment firms aren’t sure they’d be able to find enough multifamily properties to acquire.

“I do think that low supply and high demand is keeping people in their investments because the pool of attractive alternatives is pretty small,” says Tess Gruenstein, senior vice president of acquisitions and portfolio management at Bailard, a $5 billion asset and wealth management firm. “If I own great institutional-quality multifamily product and sell it, I’m going to have to replace it. I’m taking a gamble. Who knows what I’ll end up with? But if I stick with what I have, I already know how it’s performing and what to expect.”

Dori Nolan, senior vice president of national client services at mortgage services provider Berkadia. says she’s seen several owners decide to recapitalize or refinance existing assets even though they initially planned for a five-year hold. “They have decided to recapitalize or refinance because they like the real estate and market,” she notes. “Product is scarce, so they don’t want the money back because they can’t deploy it.”

Jeff Klotz, CEO of The Klotz Group of Companies, says the Florida-based multifamily firm has incrementally increased its hold periods since 1995. On the low end, the company’s typical hold period was 24 months. Now, it’s 48 months or longer.

“Although we can sell at a high price, we are struggling to find places to redeploy that capital,” Klotz notes, adding that limited inventory and difficulties in redeploying capital are working together to create a vicious cycle. “The more crowded the market becomes, the less inventory becomes available, forcing owners to hold for longer periods, thus further reducing the inventory available and increasing hold periods.”