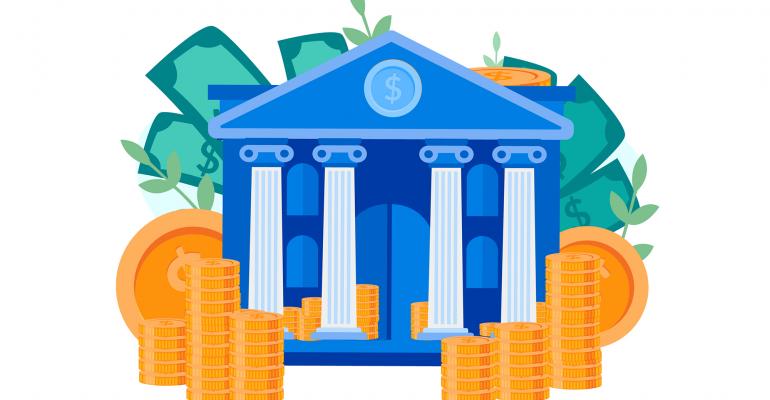 Despite the capacity to lend, banks are battling some crosscurrents in terms of competition and uncertainty in some property sectors.

Despite looming interest rate hikes ahead in 2022, banks appear well-positioned to continue originating new loans and defending their position as the dominant financing source for commercial real estate.

Total commercial/multifamily debt outstanding rose to a record $4.05 trillion at the end of the third quarter, according to the Mortgage Bankers Association, and the expectation is that those numbers will jump to a new high once fourth-quarter numbers are fully tallied. Commercial banks continue to hold the largest share of that debt at $1.5 trillion—38 percent of the overall market compared to the 22 percent held by agencies/GSEs at a distant second.

Industry data shows that banks remain well-capitalized. The trillions of dollars in government stimulus produced historic deposit growth at U.S. banks during the pandemic, while loan growth has remained weak. According to a 2022 Banking Industry Outlook Report from S&P Global Market Intelligence, that dynamic caused an estimated $3.72 billion in excess liquidity to build on U.S. bank balance sheets as of June 30, 2021, and excess funds are expected to remain above $2.9 trillion through 2023.

“Heading into 2022, I do think capital from banks remains available, and they’re going to be aggressive,” says Mike Chase, senior vice president, and managing director in the Boston regional office of Northmarq. There is a lot of capital available across the banking sector from community banks, middle-market banks, national money center banks, and even international banks. However, their strategies related to commercial real estate lending, the types of deals they are going after, and how they price their debt can be quite varied, he adds.

Banks are winning deals that are 65 percent loan-to-cost, or below, with pricing spreads in the mid-100s to the low-200s, notes Brandon Smith, a managing director at JLL in Los Angeles. Some banks can extend the term out to four or five years, which is beneficial for borrowers, while others are limited to a typical three-one-one structure—a three-year term and two one-year extensions. Most banks also require a 50 basis point to 100 basis point upfront origination fee, adds Smith.

Some more aggressive banks are willing to get close to 80 percent on leverage for acquisitions, while others are sticking closer to 70 percent to 75 percent. However, borrowers that are buying at very low cap rates are often constrained by debt service coverage ratio limits before they are constrained by leverage limits, particularly in major markets such as Boston, New York City, and Los Angeles notes Chase. For example, a 1.25x debt service coverage ratio on a property that is selling at a 4 percent or lower cap rate might put leverage a bank is able to do at 65 percent.

Despite the capacity to lend, banks are battling some crosscurrents in terms of competition and uncertainty in some property sectors. Although banks are “willing to stretch” for strong sponsors and relationships, many are still selective on sectors that have been more negatively impacted by the pandemic, notably hospitality, retail, and office.

2021 was a record high year of lending for Dallas-based Veritex Bank with about $2 billion in commercial and multifamily loan commitments. “When COVID hit, we made the conscious decision to not sit on the sidelines like a lot of other banks,” says Bob Stone, executive vice president, and managing director of commercial real estate lending at Veritex. The $10 billion regional banks took advantage of less competition and the ability to get more favorable loan pricing.

Veritex largely has focused on financing industrial and suburban multifamily developments in Texas. “The markets here are still very good and we’re very active, but we might not be quite as active in 2022 as we pick and choose a little bit more,” says Stone. In particular, the bank is watching lease-up activity and how rising construction costs are playing out for deals that it has in the pipeline. Veritex also is wary of competition that has been heating back up. “We have seen real aggressive pricing and a lot of situations are a little too cheap,” says Stone. Construction loans are now driven by SOFR-based pricing, and some banks are quoting rates at 1.95 percent. “We have not chased the deals down that low,” adds Stone.

The competition also is coming from non-bank lenders where there is a lot of pent-up liquidity. For example, some of the mortgage REITs pulled back on new origination activity following the onset of the pandemic while they focused on managing leverage and liquidity, notes Chelsea Richardson, a director in Fitch Ratings’ North American Non-Bank Financial Institutions (NBFI) group. “As a result, they now have more cash than they have historically operated with and have been back origination new loans in the past couple of quarters,” she says. NBFIs are looking at where they can get the best risk-adjusted returns, and like many other capital sources, there is a lot of interest in multifamily and industrial, she adds.

So far, bank loan portfolios have held up extremely well during the pandemic. According to the MBA, loans held by banks and thrifts that are 90 or more days delinquent or in non-accrual were at 0.69 percent as of third-quarter.

Fitch Ratings noted in a recent Global Financial Institutions article that it expects to see a deterioration in loan asset quality for banks and NBFIs in 2022 as fiscal and policy support wane. “The context for that is that the asset quality numbers in terms of charge-offs are the best that we’ve seen in decades,” says Christopher Wolfe, managing director and head of Fitch Ratings’ North American Banks group. “So, when we say we expect some level of deterioration, it is from unsustainably low credit losses,” he says.

It is difficult to sustain this level of performance, a lot of which has been helped by the low-interest-rate environment and the relatively quick rebound in the economy, notes Wolfe. The Fed has indicated that it will raise rates, which will put an added burden on loan performance. “The reality is that we are going to see some signs of credit degradation emerge, but not right away and not in an alarming way,” he says.

Although smaller banks tend to have more concentrated exposure to commercial real estate, banks across the board have made strides to improve diversification within loan portfolios. Bigger banks that have been subject to CECL rules also began releasing reserves in 2021 as the economic outlook improved. CECL (current expected credit losses) is the new methodology for estimating allowances for credit losses issued by the Financial Accounting Standards Board (FASB) that requires financial institutions to take a forward-looking view to estimate potential bad debt and adjust capital reserves accordingly.

One issue that will remain at the forefront for bank CRE lending decisions in the coming year will be uncertainty on the path of recovery and more permanent shifts in demand for property sectors such as hospitality, retail, and office. “I don’t think it’s as much as a CECL issue as it is questions around longer-term trends and how banks want to position portfolios,” says Wolfe.

Banks have a reputation as relationship lenders, and relationships will continue to play an important role in bank lending in the coming year. “Heading into 2022, the market for office and retail is going to grow. But banks are going to evaluate each transaction on its own, and a lot of it will come down to the strength of the sponsorship and the relationship,” says Chase. “That is really the key to bank lending in general. Banks tend to focus more heavily on the sponsor than some of their capital market peers.”