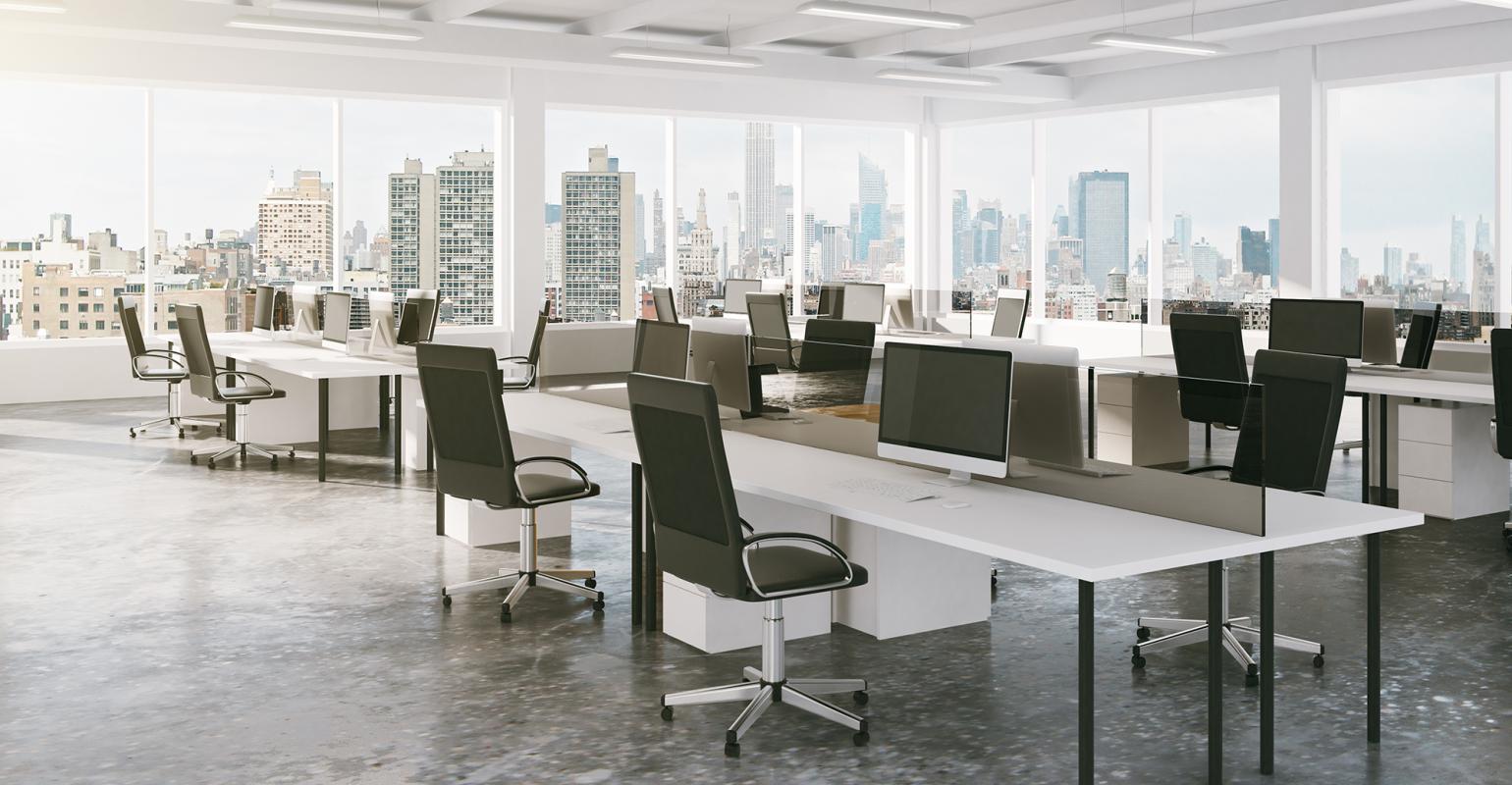 While there is concern about distress in the short term, lenders of all kinds are willing to finance the right office transactions.

A decline in office utilization if it lasts beyond the pandemic could pose risks for loans backed by office assets, because it is likely to impact office rents, occupancy rates and market values, according to a recent report from Moody’s Investors Service. The report notes that the impact would be greatest in urban markets with the highest average rents. That, in turn, would heighten risk to office-backed CMBS loans—the largest segment of the CMBS market. It would be a particular problem for loans with aggressive underwriting that are maturing in four to seven years, according to Moody’s.

The coronavirus’ impact on loans across property types is already evident, as total CMBS loan delinquencies reached 7.77 percent in October, according to Moody’s CMBS Conduit Loan Delinquency Tracker. However, the lion’s share of loan modifications and the resulting increased debt has so far fallen on hotel and retail properties.

While Moody’s does not believe the physical office will be entirely abandoned, Blair Coulson, vice president and senior credit officer for CMBS new ratings at Moody’s Investors Service, notes that tenants may give some space back when leases come up for renewal. This would take place gradually, because only about 10 percent of leases will roll over per year over the next five years, he says. In the meantime, office-using companies will continue to need some centralized space for employees to meet, but with many laying off large sections of their staff in a struggling economy, there could still be a lot of sublease space coming on the market. That’s having an impact on lenders’ approach to financing office properties.

“Lenders, or equity investors, fundamentally believe the physical office is here to stay as companies need an environment to collaborate, build culture, grow employees, and foster creativity, all of which enables their businesses to grow,” says Keith Largay, senior managing director and co-head of the Chicago office of JLL Capital Markets. “They are underwriting muted leasing activity over the next 12 to 24 months as companies get their employees back into the office and start planning their workplace strategy for the next 10 to 15 years.”

Lenders are being more cautious than before the pandemic, says Manhattan-based Richard Katzenstein, senior vice president/national director with Marcus & Millichap Capital Corp.  “Now more than ever lenders are scrutinizing tenants, are concerned about who is occupying the space,” he notes. For example, an entity like WeWork will have to make major changes in its physical space and limit the number of users at its locations to remain viable.

But lenders are looking at all aspects of a deal, according to Katzenstein, including tenant lease terms and structures, sustainability of cash flow, tenant credit status, rent collections, safety protocols that have been put in place, and the building’s location and attractiveness. For example, has an older asset been modernized, and is the location convenient to public transit and retail amenities?

“Before COVID, if a building had 25 tenants with lease rates at or below market, there was less credence given to collections than now,” Katzenstein says, noting that due to current concerns about rent collections, lenders have also dialed back debt coverage requirements from 1.30 percent to 1.40-1.50 percent.

While there is still sufficient debt capital today for new office acquisitions, says Largay, the pricing and leverage offered will be highly dependent on the sponsor, location, quality of the asset, stability of cash flow and business plan, with terms varying significantly depending on the combination of those factors. “New acquisitions mean fresh equity is coming into the deal, which lenders love to see where basis and asset valuation are established,” he adds.

In fact, there is a significant amount of liquidity in today’s market from all groups of lenders, including banks, life companies, specialty finance groups and investment banks, according to Robert Tonnessen, director of JLL Capital Markets in the Greater New York City area.

“But due to the uncertain market volatility driven by COVID-19 and noise around work-from- home, lenders are being more selective and patient in chasing the opportunities that best suit their capital,” he says. Cash flow stability, current market fundamentals and prospects for long-term tenant demand are among their key criteria.

In addition, loan terms have changed as a result of the pandemic, especially for urban assets, according to Katzenstein. While interest rates remain low, in the 3.50 to 4.25 percent range, loan-to-value (LTV) ratios has decreased by about 10 percent, depending on the lender. For example, before the pandemic, LTVs offered by life insurers averaged about 65 percent. Now that figure is at 55 percent. LTVs offered by CMBS lenders average 75 percent before COVID-19, but are now in the 60 to 65 percent range.

For the best-of-the-best properties, long-term, fixed-rated financing at moderate leverage levels will price between 2.75 and 3.25 percent, says Largay. More transitional, higher leverage and weaker market properties will price in the higher rate range, depending on an asset’s specifics.

Both Coulson and Katzenstein note that big office loans are getting done in CBDs, as long as they involve good credit tenants and long leases. Recent large financing deals analyzed by Moody’s include some examples of this. There was a $410-million COMM2020-CX Mortgage Trust transaction for a nine-story, 426,869-sq.-ft. class-A lab-office building located in Cambridge, Mass. and a $415 million VLS Commercial Mortgage Trust 2020-LAB transaction collateralized by a first-lien mortgage on the fee interest in two class A-lab-office towers with nearly 711,000 sq. ft in the South San Francisco market.

In fact, lenders particularly like office assets with lab space because not only does lab work generally require on-site presence, there is currently a lot of demand for that type of space from pharmaceutical and healthcare companies, notes Coulson. The San Francisco asset is 93.4 percent occupied by 21 tenants with 7.5 years weighted-average lease terms remaining. The Cambridge property’s largest tenant is Philips’ North American headquarters, which has nearly 15 years remaining on its lease, occupies 80.6 percent of the building’s net rentable area and represents 78.2 percent of its base rent.

In addition, a Manhattan West 2020-1MW Mortgage Trust transaction provided a $1.43 billion CMBS loan for One Manhattan, a 70-story, class-A, 2.1-million-sq.-ft. office-condominium project located a block away from Hudson Yards. The asset is 93.8 percent occupied by 10 tenants with weighted-average remaining lease terms of 17.5 years.

Despite the sector’s current challenges, Katzenstein says that investors are still buying office assets and seeing risk-return opportunities. “People have learned a lot from before to after COVID and are adapting to today’s lending environment,” he notes.

In seeking opportunities in today’s market, Largay says investors continue to be cautious, with heightened scrutiny in their approach to deals. “Opportunistic funds and high-net-worth investors are in a position to capitalize on market fragmentation, while institutional investors remain critical of pricing.”

There is financing available for office properties and some demand from potential investors, adds Tonnessen. “The bigger question today is whether or not there are sufficient sellers,” he says, noting that given short-term uncertainty in the market, many buyers are underwriting deals very conservatively, leading to valuations that may be substantially below long-term value. As a result, Tonnessen notes that many owners of non-core office assets are opting to refinance instead.

Still, “For core office assets with credit and long-term leases, the market is as aggressive as it ever has been, both on the equity and the debt side,” adds Tonnessen. He suggests that both investors and lenders are willing to accept record-low returns in exchange for stability and current yield.

There is also capital available from bridge lenders for capital improvements, according to Katzenstein and Largay. “Lenders always consider financing that improves the value of the asset, but they will want to make sure the debt structure (coverage) is in decent shape” says Katzenstein. “This may be a challenge because values have decreased, and the pricing would be a little higher depending on value vs. mortgage.”