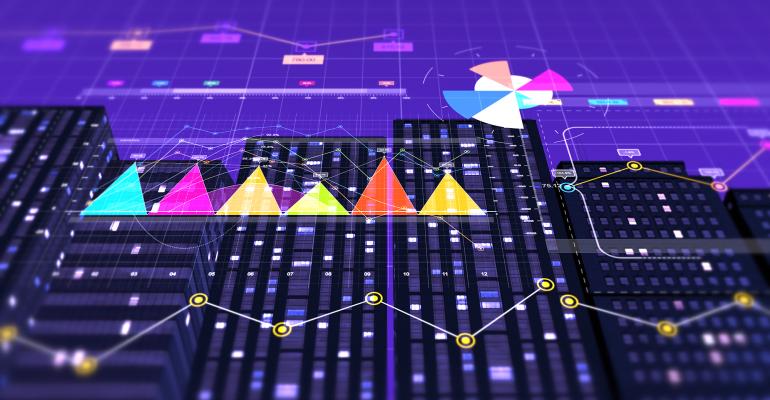 Pension funds are striving to hit their target allocations to commercial real estate, even as some move their bars higher than before.

“Since the global financial crisis, we have seen very steady growth in allocations to real estate. Institutional allocations have increased by 20 percent to 30 percent or as much as 200 basis points of total asset exposure,” says Dennis Martin, head of Americas business development at PGIM Real Estate. However, while real estate target allocations are still rising across the space, the pace of those increases is now slowing down just a little bit, he says.

The pandemic also created some pent-up demand to deploy capital that is driving a surge in investment activity. With many things shut down and everyone pulled back, 2020 was a tough year, which was followed by a considerable amount of portfolio rebalancing. The pause that occurred in new investment led to a huge bounce back in 2021, with record amounts of capital raised.

“Hands down, I think you can attribute that increase (in allocations) to the challenging search for yield that we have seen over the last 10-plus  years or so. As bond yields have diminished, the appeal and appetite of higher-yielding alternatives, especially real estate, has increased and driven up target allocations for real estate,” says Martin. Real estate also serves an important purpose within institutional portfolios as a diversifier that protects against market volatility; a source of durable income that helps pensions meet their financial liability to recipients; and as an inflation hedge.

“Generally speaking, most funds are increasing their allocations towards real assets, which includes real estate among other sectors,” agrees Eli Randel, chief strategy officer at CREXi, a commercial real estate marketplace and technology platform. For example, CalPERS and CalSTRS recently increased their allocations to real assets from approximately 13 percent to 15 percent. “That may seem small, but in those dollar amounts it is very large,” he says.

According to the Pension Real Estate Association (PREA) 2022 Investment Intentions Survey, the average current allocation to real estate for institutional investors globally is 8.9 percent with an average target allocation of 10.1 percent. Targets for North American-based investors are similar with an average current allocation at 8.9 percent and average target of 10.3 percent. “Increased capital allocations, on top of under-met allocations, is just contributing to this general glut of capital chasing institutional-quality deals,” adds Randel.

Pensions are bullish on the total returns

The NCREIF Property Index generated some eye-popping total returns north of 20 percent in 2021. According to the PREA Q1 2022 Consensus Forecast Survey of the U.S. commercial real estate market, pension funds remain fairly bullish on their outlook. Total returns across the four main property types—office, industrial, retail and apartments—are expected to hit 9.5 percent in 2022 and then decline to 8.0 percent in 2023 and 6.9 percent in 2024. The survey respondents expect industrial to lead performance in 2022 with total returns of 14.8 percent, followed by apartments at 12.1 percent, retail at 5.4 percent and office at 5.0. 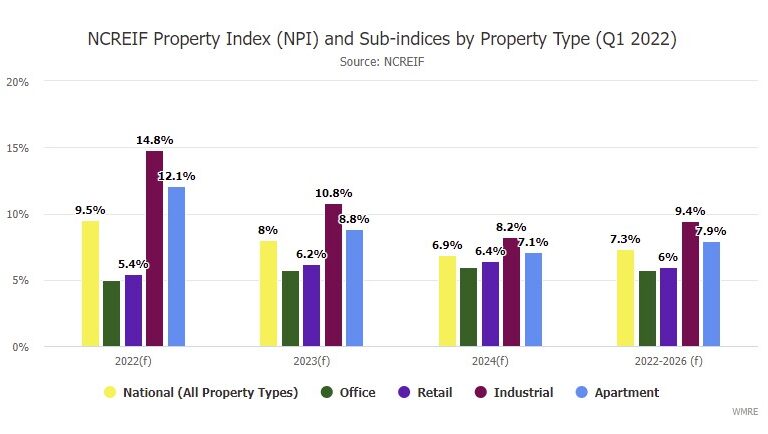 Although pension funds tend to have very strong research teams, some of those return expectations feel slightly optimistic relative to recent history, notes Randel. “I’m inclined to take their word for it, but what may be lost in some of those stats is real inflation-adjusted returns. So, perhaps there could be some very juicy returns, but how much they outpace inflation is also important,” he adds.

Above average expectations for performance may be fueled by strong rent growth in sectors such as industrial and multifamily. However, investors across the board are taking note of how competition is impacting cap rates and property pricing, and pension funds are no exception. For example, the latest Green Street Commercial Property Price Index for March shows that, despite some slowing in 2022, the all-property index is up 22 percent year-over year. “Generally, return expectations have come down because people have seen how much interest there is, particularly in multifamily and industrial where so much capital has been allocated into those sectors that return expectations have stepped down a little bit,” says Ryan Swehla, co-CEO of Graceada Partners, a commercial real estate investing firm based in Modesto, Calif.

Although real estate allocations have increased, investor appetites for different strategies have ebbed and flowed between closed-end funds geared more towards value-add and opportunistic and open-end funds that tend to target core and core-plus risk profiles, says Martin. Up until around 2016, growth in allocations was benefitting both core and value-add strategies. The Brexit announcement in 2016 created some uncertainty and resulted in a bit of a leveling off in core fundraising and new core fund formation.

From 2016 to 2020, capital flows to the NCREIF ODCE fund were hovering around net neutral or slightly positive. “More recently, inflows into ODCE funds have been decidedly positive and we’re seeing a bit of a bifurcation of interest between higher yield strategies and more core baseline strategies,” says Martin. So there is a bit of a barbell effect in the market with capital flowing to both ends of the risk spectrum that is fueled by an appetite for both growth and income, he adds.

Another big shift that is important to note is an explosion in demand for real estate debt strategies, notes Martin. “Historically, there was an appetite for high-yield debt across real estate investors. Within their equity real estate portfolios, many institutional investors would look toward high-yield debt as an alternative way to execute their real estate strategy, he says. Over the last five years, clients have had more demand for core debt and core-plus debt. PGIM Real Estate has seen investors adding lower- and medium-yielding real estate debt in increasing amounts, either as a higher-yielding alternative within fixed-income portfolios or as a diversifying feature within traditional real estate portfolios.

Industrial and multifamily are clearly the favored property types of late. However, pension fund investment strategies are continuing to expand the traditional four categories–office, industrial, retail and multifamily. Although pension funds remain wary of niche sectors, there is more interest in non-traditional sectors such as self-storage, manufactured housing, seniors housing and single-family rentals. “Five years ago, no institution was meaningfully allocating into the single-family rental market. Today, that is a very robust and growing part of the institutional landscape,” says Swehla.

Pension funds also are more willing to invest into secondary and tertiary markets, such as Boise, Fresno and Nashville in search of yield. One of the challenges to investing in smaller markets has traditionally been the lack of large assets, as well as the exit risk that is created in owning the biggest asset in a market. Graceada Partners focuses on “institutionalizing” secondary and tertiary markets by aggregating smaller properties valued between $10 million and $50 million to create funds that offer the scale and diversity that appeals to institutions.

“The story over time is that pension capital and institutional capital is getting more and more into spaces that were previously non-institutional,” says Swehla. Part of what is driving pensions into new asset types and smaller markets is the denominator effect, he says. “There is so much capital allocated to real estate that they have to get more and more creative about where they’re allocating,” he adds. 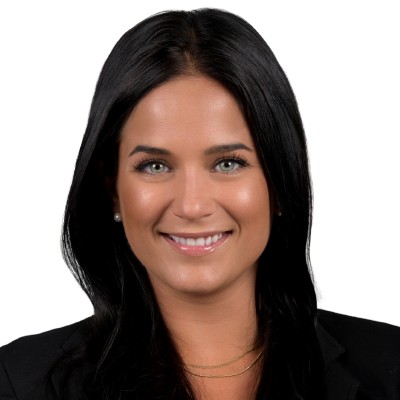